The work of Noguchi Tetsuya, whose strange yet familiar samurai figures, rooted in history while being somehow outside of time, evoke subtly mixed emotions.

Stepping from a sunny afternoon into the exhibit, called “A Field Guide to Warrior Species,” the eyes take time to adjust. In the hushed atmosphere, the first figure, approximately half life-size, is so realistic that it prompts a double-take. A samurai, dressed in meticulously reconstructed armour, shades his eyes from the overhead spotlight. On the metal disk of his maedate—the ornamental crest at the front of his kabuto (helmet)—is the perforated greeting “Yoroshiku”, or “Nice to meet you.”

The temptation is to laugh, yet the undeniable elegance of the human figure and the warlike practicality of the armour makes me pause.

Next, a scroll, convincingly painted to appear hundreds of years old, portrays a frail-looking samurai boy seated in armour, but wearing anachronistic eyeglasses. The title is “Portrait of the Artist, Age 4.” I want to laugh at the conceit, but there is something in the expression of the boy—a confidence, a certain precociousness—that makes me look deeper. Like the Mona Lisa, the expression hints at an underlying mystery.

Further along, another scroll depicts a proud, white-bearded warrior in bright-red armour, mounted atop an antlered horse. A red conical helmet adorns his head; his crest, a single pine tree. The title: “Santa Claus Samurai.”

The works of Noguchi Tetsuya may appear silly or tongue-in-cheek at first glance, but like the dreamy works of surrealists like Dali or Magritte, they seem to tap into the viewer’s subconscious to take on a deeper meaning. That the figures have captured people’s imaginations is clear: this month-long exhibit drew more than 20,000 visitors, setting a new record for the venue.

Noguchi Tetsuya was born in Kagawa prefecture in 1980, on the island of Shikoku, and was always drawn to creating art. “Unlike other children who played soccer and did things outside, I just drew pictures and made models”, he said. Noguchi’s early obsessions were with picture books of dinosaurs and fossils, beetles and insects, robots, and the bizarre kaiju monsters that did battle with TV’s Ultraman. He was fascinated by the special effects models in sci-fi films like Star Wars, and from a young age, he had a love for history, and in particular, samurai helmets and armour.

“When it came time for me to go to university, I had no intention of entering a company and working. I wanted to go to art school and keep drawing and creating. Actually, there was nothing else I was capable of doing”, he admitted.

Noguchi began his art studies at Hiroshima University, majoring in oil painting, but he soon felt that something was lacking: “I found myself wondering if I could create artwork that I myself could enjoy. On one hand, I loved history, but I was also grateful to have all the blessings of modern life, like movies. I thought, why not try to create artwork where the lines between past and present have been taken away?”

This blurring of past and present is sometimes subtle, as with the figure of a young ashigaru foot soldier wearing a messenger bag and green sneakers that seem not at all incongruous with his brightly laced armour. Another figure of an older samurai carries a briefcase as he looks up intently. It is the exact pose I have seen a hundred salarymen strike as they study an electronic signboard on a train platform. Another old warrior appears to be transported away, listening to music on a pair of headphones that sport the crest of the Tokugawa shogun.

Other work is more obviously fanciful, like the full-size armour made for a housecat, or the samurai flying with a helicopter assembly emerging from his helmet like Doraemon’s take-copter (or if you prefer, Inspector Gadget). Elsewhere, a samurai streaks across the sky with an iron rocket pack strapped to his back. Silly? Perhaps, but I also could not help but think of the kamikaze pilots of World War II.

I asked Noguchi: did he see his figures as travellers from the past? Or are they inhabitants of some mysterious, alternate universe? “I think the best thing I can do is to create people that are neither from the past nor the present—just a universal image of human beings. I’m pleased if people feel they are mysterious.” 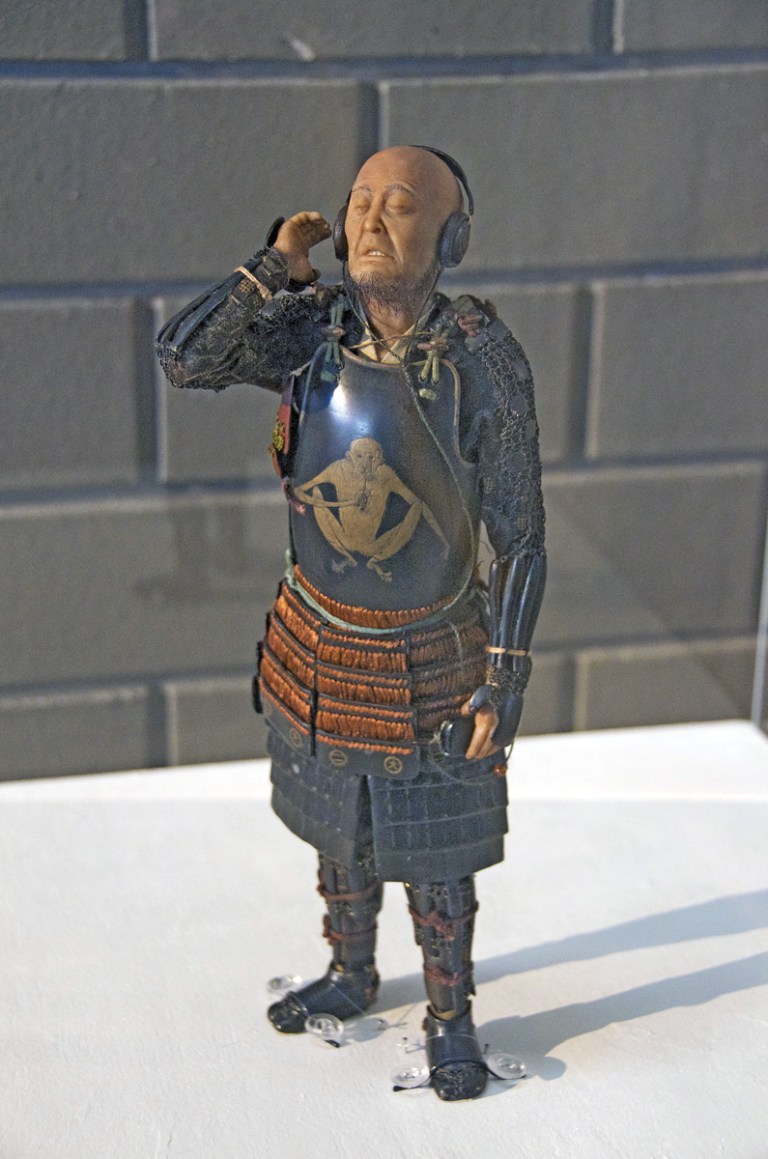 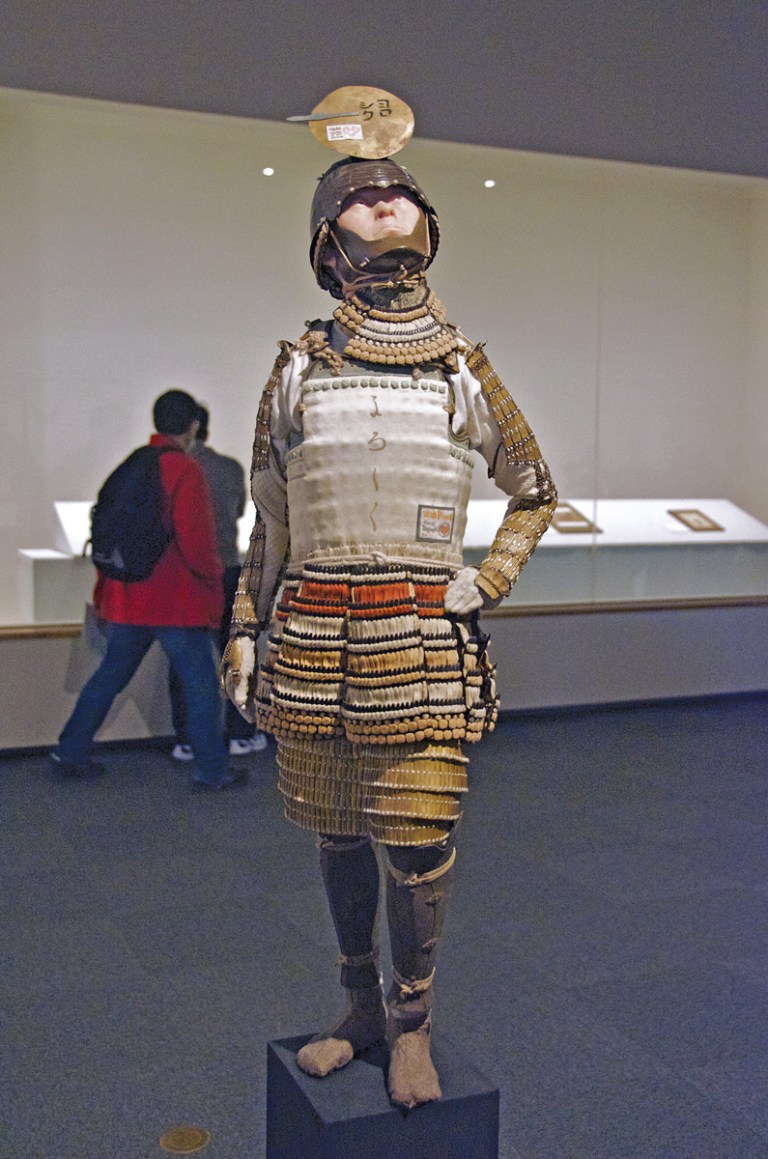 A number of young artists in Japan—among them Akira Yamamoto and Hisashi Tenmyoya—have achieved recognition by mixing traditional motifs and classical styles with modern themes. But Noguchi does not feel that this is a movement or a trend, so much as a generational issue. “I’d like to think that my artwork is actually contributing to providing relevance to the next generation to receive the culture from past generations.”

What role does the culture of bygone times play for people today? “Well, everyone knows that dinosaurs have disappeared, but actually, if you look around our modern world, traces of the dinosaurs remain everywhere, just in different forms. For example, dinosaurs changed their forms to birds. So from my perspective, Japanese culture tends to take on the form of previous culture while changing its form naturally.”

One striking aspect of Noguchi’s work is the ambiguity of his creations’ expressions. Some figures appear to be deep in contemplation. Others seem tired, or sad. Absent are the heroic poses usually associated with the samurai. Instead, some of Noguchi’s samurai figures are curled up in a fetal position and mounted in specimen boxes.

“I had a strong purpose of trying to connect [my work] to animals and biological specimens, because for me, samurai are not something to be admired as heroes, but rather something that should be researched in order to be understood. For example, when someone wants to know about sharks, no matter how much one looks at them and thinks about them, they won’t come any closer to understanding what they are really about. If you want to know about sharks in real situations, you have to study and conduct research.” Does Noguchi believe the samurai are so separated from us by history that they are almost another species?

Noguchi Tetsuya faithfully recreates traditional construction techniques with modern materials like acrylic paints, plastics and resins. Fabric is painstakingly stitched by hand. Tiny plates of armour are lacquered and laced together with string. Even the figures’ facial hair and eyebrows are inserted strand by strand. The process of creating a 30-cm figure takes around two months; larger figures can take much longer.

The historical accuracy and research surrounding each piece is also amazing; Noguchi’s studio is filled with reference materials. “I am often asked if I belong to armour or historical research groups. I don’t—I actually learned everything on my own. I think there’s no limit to what you can do by yourself in your own room. The most important thing is to follow your passion.”

“I think there’s no limit to what you can do by yourself in your own room. The most important thing is to follow your passion.”